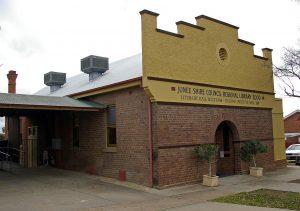 In 2000 the Junee Regional Library moved from a cramped Council Chambers back to its former home – the Literary Institute Hall. In the 1930s the Railway Institute ran the Library service.

The Council and the NSW State Library saw the potential to convert the abandoned Railway Institute Hall into a modern, functioning library space that continued to be used until 2010.

Since then a new library was built in Lorne Street, refurbishing the old Junee Co-Operative Society’s building using innovative heating and cooling systems,.

Dunn + Hillam Architects were awarded the Premier’s Prize for Architecture 2010 for the Junee Library. The project also went on to win two Regional Master Builders awards for the builders Nash Bros Constructions.